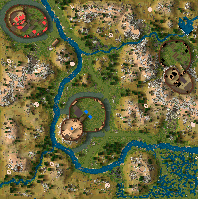 I feel like most of my job has already been done here in all the great write ups that were posted by Duc de Noisiel, Andy Baz, Brave Sir Robyn, and Lord Beaker in the forum map thread. All have somewhat different approaches so they're well worth a read. Mine below is not necessarily any better, just another player's view.

You have to accumulate 1,000 stone, 16,000 gold, eliminate all troops in the two other forts, and survive all the invasions in a 30 year period. Somehow it goes all to quickly as there's so much to do. Along with invasions there are assorted farm blights, bears, wolf attacks, and granary thefts to contend with, but that is offset somewhat with a generous amount of marriages and traveling fairs.

There are three stone sites that can accommodate a total of four quarries. Two quarries can be sited on the stone near the black fort and workers will be out of range of the black archers, so they can be set up early with interference only from enemy hunters and bears. These you should be able to deal with fairly easily.

The other two stone sites can hold only one quarry each and are in range of some of the enemy archers in the forts. You can use your own archers to take out the troublesome enemy units in range of the quarries and/or use walls to shield your workers. The quarries can function with most parts of the enemy forts still intact and manned. You will, of course, have to remove the enemy quarries first to place your own.

The four quarries running flat out for the full 30 years will produce slightly over 2,000 blocks, double what you need. That means two of them can almost get the whole 1,000 you need. But that supposes starting both in the first year and running without interruption. So you will need those other two sites to add to your production at some point. It does mean that you could wait until a little before the midpoint to start stone production as long as you put all four in service at that point. But that's cutting it dangerously close. A more realistic strategy would be to get those first two in production reasonably early in the first half, although it could be after the first huge invasion. Then be sure you get the other two going before the halfway point, the earlier the better.

Don't forget the trick with quarries is to place enough ox tethers so that the stone platforms don't ever fill up. If a platform gets full the quarry workers will stop until stone is taken off to make more room. If you can keep your quarries running continuously you will get the maximum amount of stone from them no matter how far they are from the stockpile.

Another concern is gold. If you can get a good wheat economy going and run at double rations you'll have plenty by the end. If you run extra rations or less, you may have to take extra steps. More peasants mean more taxes--that's one way. You can mine some iron and set up pitch rigs, selling the iron and pitch. You can also sell bows and spears if you can produce a surplus, and excess wood, food, wheat and hops can also be sold. If you keep an eye on your treasury and plan well in advance you should be ok on gold by the end.

Setting up the economy: Your first choice is placing your granary. I placed mine right at the foot of the ramp leading up to the motte. To my way of thinking this puts it down near the stockpile and closer to most of the food producing buildings you'll be using, increasing its efficiency. But from the screen shots in the forum thread it looks like I'm in the minority on this. Most, if not all, put their granaries up next to the keep inside the inner wall. No question it's much safer up there.

You should get lots of woodcutters set up as you have lots to build, plus extra wood can be sold. But be careful of any you place directly out front and on the hill towards the black fort. Woodcutters tend to clear the near trees then venture too close to the black archers, getting shot in the process. You may have to delete these after a short while. Lots of woodcutter deaths can slow down your archer training. I recommend putting a lot of woodcutters around the back in addition to the sides. It's much further, but there's lots of trees back there and they'll be much safer, although they will have to contend with wolves when they attack. If you place lots the distance won't matter. Send some archers out to clear the bears and keep enemy hunters in check.

Some players like to start with apples, but I prefer to go straight to wheat, especially when you have a generous amount of food to start you out. I kept everything inside the starting walls except hovels, which I put way in the back corner and along the back edge of the map, and the market which I put towards the back. I set up five wheat farms inside the front perimeter wall and two hops farms to the left of the ramp.

I built a couple of fletchers very early and added many to them, plus a poleturner and later a second one. I had a couple of breweries tucked in behind the hops farms, and bakeries all around the granary and wheat farms. The fletchers and armory were around the stockpile, plus a couple of mills. Up top I had the inns, more breweries and a few more bakeries. I kept full ale coverage to add +4 to popularity. I didn't fool with religion this time through, just deleted the chapel to make more space. I later added bakeries outside the fort. As you can see in the screen shots in the forum map thread, some players set up quite a bit outside the fort in later years.

Defense I'm with Brave Sir Robyn on this one, a nice wide moat. It's all you really have going for you. And as many archers as you can produce. Start your macemen and spearmen digging right at the beginning. A very wide moat is quite effective but on a good map like this one there's always chinks in the armor. Because of the hill in front of the area between your two gates, the moat can't be too wide there, and the enemy may dig it all up and get to the walls at that section. You can try beefing the wall up there and adding platforms but the enemy may still breach it. Be ready.

One thing that I quite often do with my moats is to make them extra wide near entrances and leave only a single tile path from the gate or drawbridge to the outer edge of the moat. Here I added another technique that I very rarely use. With only bows and wood against a massive attack that includes lots of armor it seemed to be called for. I have some spearmen standing by and temporarily dig up the pathway when the enemy attacks, leaving moat only and no access across. Even with that they're capable of digging up the moat and breaching the wall at the narrow center mentioned above, but if you add a few more wooden platforms with extra archers there it can hold fast.

I had about 125 archers ready for the first invasion, which is the largest. After that invasions are smaller and much easier to handle.

Capturing the forts is not hard. They can be taken with a good sized force of archers and just a small band of spearmen to breach walls and fill moats. There are many vantage points around each fort where you can take out many of the archers and foot troops. Then you can move in close to the walls and take out many more. Breaching the walls, you can enter and advance through the fort, pretty much eliminating all other troops with your archers. If you have a lot of spearmen or macemen and the swordsmen left over you can use them to speed things up.

With the forts out of the way and the invasions dealt with, it's just a matter of reaching the required goals for stone and gold.