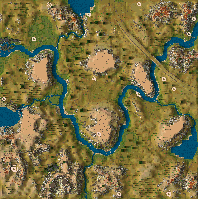 Alwyne Valley by Duke of York

This is a fun map with economic goals and good stiff invasions. It's large, has varied terrain, and provides six different locations where you can place your keep. Each has various advantages and disadvantages. Some are more defensible, some are closer to more farmland, and some are closer to resources such as iron, pitch, and stone. With three signposts on three sides of the map, most locations keep you guessing about which direction invasions will come from.

Looking at the mini map above I've arbitrarily numbered the keep sites, starting in the upper left and proceeding clockwise, as 1 through 6, thus:

It's interesting that most, if not all of these will work, even on very hard. When I originally played this I split off my stockpile and located it at site #1, leaving the keep at #6. This kept the keep out of the way of the stockpile and let me put more buildings around it on the top of the pad. It also focused attacks on the keep and less on the production area.

This time, however, I played it in position #2, a more exposed and harder to defend position. It's interesting that others played successfully at other locations, Duke of The Glen split his keep and stockpile playing at sites #2 and #5, and Duke of York himself in position #4, although not on very hard.

I'll base this write-up on position #2, which should cover most situations no matter where you set up, I think. I tried to position the keep right to the edge to leave as much buildable space around the attached stockpile as possible. I was quite surprised that there was enough room eventually for 11 wheat farms close by, five immediately just south of the keep, and six more a bit later when trees were cleared west of the keep.

The first light attack will come all too soon in Jan of 1104, and a second major one in Jan of 1106, so you must get your economy going very quickly and plan your defenses. You can buy wood but you really need the gold for weapons workshops and troop training, so setting up a lot of woodcutters might be a wise move rather than purchasing much. There's plenty of trees and you can sell surpluses later to help pay for metal and leather armor, chapels and to contribute towards your gold requirement for victory. You have very little wood to start but a good supply of food, so you have the time to put all the initial wood into woodcutters huts to get a larger initial wood delivery.

Since you have 15 wood to start you also have just enough to build a marketplace, so you do have the option of doing that instead, and purchasing more than 15 wood to start. I can't say that is not a better choice. You'll have less money to start but you will jump start your wood production and your economy in general. When the first wood came in I made more woodcutters and started setting up some hunters and wheat farms.

The market is quite limited. You can buy and sell wood and iron, which can help you in building and producing swords and maces, and allows you to sell surpluses later. Cheese is available if food stocks run out and ale can be bought for the inns, but neither can be produced. The weapons you produce you cannot sell and some you need you have to buy. You need metal armor for victory, all of which must be purchased, and you can buy leather armor if you produce maces, to train macemen. Bows and crossbows cannot be produced or purchased so missile troops cannot be trained. You will, however be sent archers for achieving certain goals, such as certain quantities of meat, apples, bread, stone, gold, ale coverage, and three levels of blessed peasants. These are important for an adequate defense, but don't expect to get them all. I think I eventually got all but the last two levels for blessed peasants. And don't forget on very hard, quantities to trigger the archers are doubled. Percentages of blessings and ale coverage remain the same.

Defense can be tricky. You can train all types of melee troops including knights. It could be rather difficult to rely on melee troops only, so you really need all the archers you can get the emperor to send you. You can quarry stone and build walls and towers, a big help. Engineers are available and can build trebuchets and shields, neither of which I found useful. But they can be used for tower mounted mangonels and ballistae, and for boiling oil, all of which can be very handily employed. Pitch is available if you gather it yourself, to supply the oil engineers and also to lay down as pitch ditches. It's the pitch that really saves the day here, as the emperor's archers and your melee troops will not be sufficient to repel the large invasions that will be coming your way.

That's why wood is so crucial to this mission in the beginning. Not only do you need to establish your food supply and start making weapons, but you must set up pitch rigs and start quarrying stone right away, too. And if that wasn't enough, you need iron for weapons to fight with and for victory goals. All these are a distance off spread around the map in multiple locations. Be sure you exploit all that is available, and watch for bandits who love to find and smash your outlying industries. Rebuild these immediately.

Another problem in getting goods to flow is the bears and wolves, especially in the whole eastern and southern sectors. You could sacrifice melee troops to help deal with these or wait for some archers. An archer or two inside the bottom middle of the horseshoe formed by the river can help substantially with the bears and some wolves across the river to the south in that area. For others you'll need to send out some kind of troops to deal with them.

I built up to an eventual population of 172 and ran a lot of the time at double rations. I also used bad things at a fear factor of -4 for greatly increased production until the economic goals were reached, and then I deleted them for the gold and to shed their combat penalty for the final invasion. I maintained full ale coverage and ran taxes between -6 and -8.

I initially set up hunters, and four apple farms in the area south of the keep, and turned off apples and meat in the granary to build up enough of them to collect 15 archers for 100 apples and another 15 for 170 meat. It might have been wise for me to set up more apple orchards in the far northwest now rather than later, but I didn't. Even with the good starting supply of food it may be necessary to buy in cheese to squeeze you by until at least one of these goals are met. As soon as you get your archers you can release the food for consumption. I then deleted the nearby orchards and set up five wheat farms, later six more when trees were cleared.

I survived pretty well on bread mostly after that and used the hunters to store up meat for the victory conditions. Apples are also needed so I set up orchards in the far northwest across the stream. Farmers must travel a good distance up and around the large hill, but if you set them up early enough there's plenty of time for them to gather enough, leaving all the close farmland for your wheat crops. It's worth a try at religion when you can afford it because there is a potential for 25 archers in three increments. I got the first 10 only, but even that was a help.

I put structures that didn't need to be close to the stockpile out south of the keep in the large area protected by the river: inns, chapels, barracks, and engineer's guild, to reduce the fire risk. I put a number of wells around the weapons workshops and armory, plus the bakeries and granary. When the fires came I faired pretty well, only losing some wheat farms and bakeries, which I promptly rebuilt.

I built a wall basically flush with the north side of the raised building pad, extending northwest to the stream and southeast to the river, creating a single straight wall that, together with the "U" shaped part of the river to the south protected a very large area for production. I put one tower, later expanded to two, on the outer, northeastern side of the pad, with ballistae. Since the wall was long and probably breachable I used a funnel technique for the entrance. This uses an open pathway to the keep rather than a gatehouse, narrowed down to one or two tiles wide and laced with multiple patches of pitch. In later invasions I also had oil engineers lining the walls and reinforcing the entrance. This technique needs adequate melee troop backup and good timing in lighting the pitch, but can be very effective in toasting large invasions.

Choking the entrance with expendable troops or workmen, like spearmen and woodcutters heading the opposite way can really help to stall the invading troops, causing them to bunch up and make the pitch much more effective. You can try sleeping the woodcutters just prior to the invasion, then send them back to work at the appropriate time, or do as I did here: I maintained a large peasant reserve around the campfire and when I needed woodcutters to head out and block incoming troops, I quickly built a number of extra woodcutter huts in an outlying area. This way the regular woodcutters needn't be interrupted more than they ordinarily would be during the invasion.

I also established a couple of square towers with ballistae and some archers on the pad at position #3, which had a commanding range of fire over the bridge, the southern and eastern approach to the bridge, and back towards some of my walls.

Probably the most crucial thing in this mission is being ready for the second invasion in Jan of 1106. The first one in 1104 is quite small but does include four knights, who love to destroy precious industries. But the second invasion is much larger and you may not survive if you don't have enough stone for walls and pitch to protect them and your approach. With my vital production behind the walls for the second and subsequent invasions, the knights were effectively neutralized.

If you survive the second invasion, you should be alright for the next ones as long as you continue to build, fortify and train troops. They will be larger yet, but you should be much stronger, too.