Solutions For Sparrow's Extreme Challenges
My picks of the most difficult maps to play in Stronghold Crusader. 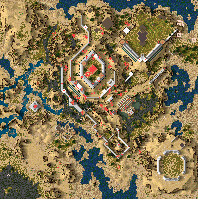 Grove of the Divine by Harmonastix

This is a large sprawling castle with two main approaches, one to the west, and another to the southeast, each protected by a gatehouse. Between the two is a large defensive outcropping that the enemy will tend to walk around to get to the opposing gate. This can be used to inflict much damage on traveling enemy troops. The moat is very small and should be protected for as long as possible. There are three concentric enclosures surrounding the keep, mostly wall but also making use of terrain features.

You have a little while to build up your economy and train some more troops, but you'd better get busy because there will be a lot of invaders. In case you haven't discovered it yet you cannot build any walls, stairs, towers, gatehouses, or dig moats. And you can't quarry more stone for repairs. What you see, including the skinny moat, is all you'll have in the way of fixed defenses, so protect them well, but expect at least the outer one to be breached and be prepared to fall back to the second wall during later invasions.

Pitch is available and can be used effectively, also a boiling oil pot and engineers. Although I didn't end up using it, placing pitch on the pathway around that southern outcropping will catch lots of enemy troops that use that route to get around the castle.

You can mount ballistae or mangonels on those towers that will accommodate them. All siege equipment, including shields are available. Shields especially can be a big help in protecting your missile troops. You are given many to start, but most are unmanned and there are some that need to be moved from near the engineers guild to a useful defensive position. You can use the supplied engineers to transport the shields to the appropriate tower or wall positions, and then go build more. I recommend making lots more. Using this method you can get a lot of shields up for very little cost. There are also a number of unmanned fire ballistae ready built.

There are many defensive locations for your missile troops: various towers and wall positions, cliff tops, and raised land areas offering protection, so numerous that many of your troop positions will survive even a severe enemy onslaught. The three concentric walls, enclosed production area, and many smaller areas segmented by topographical features make for a very complex castle and long walking distances for workers and when moving troops. This has disadvantages for you regarding production and positioning troops, but works against the enemy, too, as it disrupts and slows down his advance on your keep.

Expect, farm blights, granary thefts, plague, and especially fires -- and at very inopportune times. The fires in particular are very nasty, capable of breaking out in multiple locations, and in groupings of just a few buildings. You'll need plenty of water pots. It's probably best to maintain as much production as possible in several large main areas, such as the walled-in stockpile and granary area, and the large flat area just north of that, so that you can concentrate a lot of water pots in those areas. The most frustrating thing about the fires is the loss of peasants (and the time it takes to get them back) and the distance they have to travel from campfire to workplace. Lots and lots of water pots will get you through.

Gold is very important. In the beginning you'll probably want to buy in some wood, then you'll need it to establish weapons production workshops and train or hire troops. Later lots of fire ballista are a great defensive weapon. You'll need plenty of wood, too, so I set up about 18 woodcutters. There's a fair amount of wood close in, much in the castle and a lot close by outside. This may run out and you'll have to shift to chopping trees in more remote parts of the map. Many huts outside the castle will be destroyed by the enemy and need to be replaced. Monitor your woodcutters.

Full ale coverage is an important +8 to keep taxes high. I kept the inns in one area with lots of water pots, but a case could be made to spread them around so that fires will only impact a few of them at any one time.

There's really only one place for farms, in the enclosed stockpile area, so you'll want to maximize land use there. Actually you can also put a few in the inner bailey next to the keep (the smaller ones that is, wheat and hops). One will fit northeast against the keep. If you don't mind deleting the stairs on the northwest wall, you can put a second next to the first in the north corner. I used the space for hops farms.

In the main walled production area with the stockpile I put two mills, lots of bakeries around the granary, six wheat and a few hops farms around the perimeter on the east and north, seven breweries, lots of fletchers and tanners around the stockpile, a dairy farm, and lots of interspersed water pots, 13 in that area alone. I put all my inns in the flat area just north of the walled one. You can also place several pitch rigs and iron mines within the castle, and additional pitch rigs outside the walls. I've done this without mining iron, gathering pitch, or using pitch. but these can make it easier and surplus pitch and iron can be sold.

I ended up with ten fletchers, eight tanners, one blacksmith, and two armorers but you can get by with less.

I tend to prefer crossbows as the main defense, but other troops can work. In the forum thread Lord Beaker reports using slingers to great effect. They are cheap and can be quite destructive in large numbers.

I recommend gathering all those patrolling monks, assassins and slaves to fixed positions for use in slowing down the enemy in case of a breach of the first wall, protecting the lookout towers, and later to protect the fire ballista.

I think there are many tactics that can work here. I moved all archers and crossbowmen to the outer walls as there aren't a lot to fend off the first bandit attack or the first invasion unless you do. And if you make lots of shields you should repel them handily. And I mean lots of shields, maybe three or four on every tower and gatehouse. They're quite cheap if you use a small band of engineers to create and position them.

I produced only crossbows until well into the game and filled in with slingers as peasants were available. Later I bought in iron to supplant what I was producing and made swords and metal armor and set up a few stables. With these I trained some knights and additional swordsmen. The knights were not in time to counter the siege engines so were just backup. The swordsmen provided extra protection for the lookout towers.

I also added a few more fire throwers so there was at least one in each tower. Later in the scenario I produced a lot of fire ballistae, which if positioned well and protected are extremely effective in the later invasions if your outer wall is breached. By the time of the last invasion I had 200 crossbowmen and 50 fire ballistae.

The two lookout towers in the southern part of the castle can be extremely effective. If the southern defensive outcropping is breached they can be difficult to hold onto in the beginning, but when you have more crossbowmen you can pack the towers with 25-30 by sending groups of five each, simultaneously to an empty tower plus five shields. Then put two or more swordsmen on the steps to guard and other lesser troops in the vicinity. Macemen like to attack troops in the tower but armored troops generally pass them by.

Later in the game when I could afford lots of fire ballistae I placed them outside the southern tip of the second wall, between the wall and the low cliffs in front of it. With troops to protect the access at either end they can fire in either direction at enemy streaming through a breach in the outer wall. Another effective place for them is on the cliff tops encircling the southeastern gate.

There's also another great spot I used which is a cliff outcropping between two perimeter towers in the southwestern wall of the southern outcropping. You can station quite a few crossbowmen there, but they must be well protected by both shields and troops. Use monks, slaves, assassins or slingers.

Playing this map basically consists of building up a strong economy, making lots of weapons and training as many troops as you can. I ended up with quite a large population of 164. I had to stay on normal rations, but did maintain a +8 for ale, allowing that large population to generate healthy taxes.

There are lots of invasions, so just keep the troops coming. My outer wall was breached by siege equipment, but this castle is well configured and you can make a very strong stand at the second wall. You should be able to hold them off there, but even if that is breached the inner wall provides an excellent last stand if you have the troops left to man it.