GillB has provided us with more information on another of the Siege mission castles. This time it’s Javier Castle, in Navarra.

Javier Castle is in the province of Navarre in the Basque region of Spain about 30km from Pamplona. It was originally constructed on a rocky hill in the 10th century as an Arab Fortress. However, there is virtually none of the original Arab buildings left.

First of all, I’d like to wish all of you a

on behalf of the Stronghold Heaven staff.

And what do you get for Christmas? 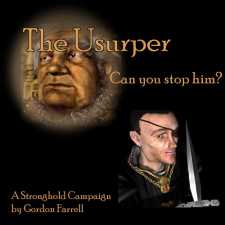 Indeed, a present. Together with Gordon Farrell we are excited to present you with the first 3 chapters of the Usurper campaign.
Over the coming weeks you will get to play the next episodes of this great story with it’s grand climax four weeks from now.

Our favourite game, Stronghold, received one of GameSpy’s Best of 2001 PC Strategy Game of the Year: The Runner Up Awards. You can read more about it, here.

Overall winner in the PC game category was Empire Earth a game hosted by one of our sister sites.

A little birdy told me today’s the birthday of FireFly’s Darren Thompson.
We wish him many more years of happy gaming.
If you want to wish Darren a happy birthday yourself, you can do so here.

Heidelberg Castle, which is also known as the Red Walled Castle, is built on a 195m (640 feet) high hill called Jettenbühl which overlooks the eastern side of the city in south west Germany. It has beautiful views down into the Altstadt and along the Neckar River.

You can read more if you follow the link.

Castle of the Week 4 – Chateau Haut-Königsburg

Yes, it’s that time of the week again, time for another Castle of the Week. This time it’s a castle in France and GillB found us a fair amount of information.

In 1114, Friedrich of Hohenstaufen recognised the strategic importance of Staufenberg, the hill on which the castle is built. He had become Duke of Swabia in 1105 and, to make himself secure, he built a whole series of castles.

Oh, one more thing, I’ll be adding the small map from the scenarios to the descriptions. They are amazingly lifelike.

More info about the demo

I just received a message from FireFly’s Darren Thompson, who informed me the new demo is not just a multiplayer demo, but contains the two maps that were supplied with the original demo as well.

Apart from that it offers a brand new Siege map.

You can find it here.

Downloads Up and Running

We are pleased to announce that the Stronghold Heaven downloads section is now working. Now we just need all you map designers out there to submit your maps and hopefully there will soon be a wide range of missions available for players.

Well, a new site, so it was bound to happen. We already acquired on brand new cherub on this site, and now we have two.

He will be working on the Map design sections and supply you with articles on how to make the most of your scenarios. He has a long history of creating solid scenarios, and got some rave reviews from some of our other staff when I suggested taking him on board.

Please welcome Inquizative to the exalted ranks of the Stronghold Heaven staff.

I got a Message from GameSpy’s Sean Flinn telling me that they now support not only the full game, but also the new multiplayer demo. Here’s a bit from their news release

Load up your catapults and raise your drawbridge: the multiplayer demo for the hugely popular castle-building sim / strategy game hybrid Stronghold has just stormed GameSpy Arcade. Now you can construct your fortresses and go head-to-head with your warlord buddies in castle-smashing combat online with speed and ease using the world’s fastest growing online gaming software.

All you need to do to get started down the road to victory is the Stronghold demo, which you can download from FilePlanet, and the GameSpy Arcade software, which you can download from the Arcade Website. Better yet, you can use Arcade’s unique DemoSpy tool to find, download, install and launch the demo using one easy-to-follow interface. Slick, eh? What are you waiting for? Your castle awaits. Download Arcade and the Stronghold demo today, and start your siege today!

Merepatra found part one of a nice little interview with FireFly’s Robert Euvino, the composer and sound FX god for Stronghold.

Cherub GillB was the first one to spot we hit the 10,000 visitors mark last night.

All I can add is thank you for visiting, and let’s aim for the next zero.

Cherub TNK pointed out another interesting titbit, namely the fact that a new Stronhold Multiplayer demo has arrived. You can find it at the God Games Stronghold site, but also FilePlanet

Cherub Gill’s pen (or should I say keyboard) has been busy again. This time she brings us the Spanish castle of Guadamur.

Guadamur is very close to the moorish city of Toledo in central Spain. It was built on a hill overlooking the town in the late 15th century by Don Pedro Lopez de Ayala (who became the Count of Fuensalida in 1470) and was much beloved by members of the Castilian Royal Family.

For those of you that do not have a copy of this delightful game (and why not?) Steve sent me a little message telling me that at BestBuy you can get your copy for not $39.95, but $29,99.

What are you waiting for?
Oh, Christmas…

No Downlaod Section Just Yet

Angel Spineman ran in to some delays while busy coding our new Download section, but is getting closer to the final result, which should leave us with the best Download section around.
We are going to need it soon as Gordon Farrell is busy working on a seven or eight episode campaign.
I will keep you posted on it’s progress.

In the mean time I added another three walkthroughs for the military campaign:

Castle of the Week – Schloß Glücksburg

It’s time for the second of our weekly castles and this time we go to Germany for a visit to Schloß Glücksburg.

Glücksburg is in Schleswig-Holstein, a German state, just below the border with Denmark. The castle was built in a lake by Nikel Karies, a master builder from nearby Flensburg, between 1583 and 1587 for Duke Johann the Younger of Schleswig-Holstein-Sonderburg.

Once again Gill B(ritannica) did the write-up.

Merepatra has been hard at work to bring you two more walkthroughs for the Custom missions. Both of them are Economic Missions and can be found here:

Four more walkthroughs were added to the military campaign section:

Today sees the launch of what we hope will be a weekly feature: Castle of the Week

Each week we will try to host a page of information about a specific castle. For the first few weeks we’ll be hosting all the different real castles that are part of Stronghold.
Today it’s Castell y Bere.

Thanks to GillB for the write up.

Game of the year awards

GameSpy is hosting it’s anual Game of the Year awards

The GameSpy 2001 Game of the Year Awards – Fan Voting
You sure know how to pick ’em.

This year, rather than just soliciting comments through email for our Game of the Year Awards, we thought we’d go big with a lengthy period of voting and commenting and all that good stuff, culminating in our official Fan Awards. Voting will run from today until December 23rd.

Stronghold is one of the games that has a chance of recieving this coveted honour, so why don’t you head over here and make your vote.

In case you are wondering, Stronghold is listed under PC Strategy Game of the Year

Why are you still here?

Three more walkthroughs were added to the military campaign section:

Every good game needs a patch and Stronghold isn’t any different. The patch takes care of a few things cxoncerning gameplay and updates a few scenarios.

The readme that comes with the 7.2Mb file lists the following fixes

You can down load it directly from the God Games Stronghold site.

On behalf of the Stronghold Team I’d like to welcome you to our latest site: Stronghold.

Stronghold
FireFly Studios’ STRONGHOLD is the culmination of our long-standing desire to create a really good castle building game.

In concept it is a unique cross between a city builder and a real time strategy game. The key to the game is the castle; designing it, managing it and defending it. Each of these elements has its place in Stronghold and you will need to consider all of them to be a really good player. There is no open field combat, only ever increasing hordes of besiegers whose sole purpose is to destroy all you have built. Depending on how well you have built your ‘castle’ you may or may not survive!

The site will offer you the things you’ve come to expect from Heavengames, such as walkthroughs, game information, downloads and forums.

We hope you enjoy our efforts.

Which leaves me but one more thing to do, which is introduce our first Stronghold Cherub: GillB or as she’s know to the City Builders, Gill Britannica.

She’s done a great job in helping us get the site ready in time for opening and will watch over you in the Economic Mission forum.

Please give her a warm welcome.