Sparrow's Extreme Challenges
My personal picks of the most difficult maps to play on "very hard" setting.

This is the map thread for: 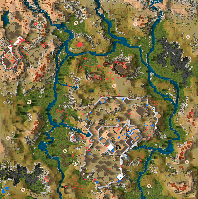 Solution will be published with the next challenge in two weeks.

Please make all posts for this map in this thread.

Please feel free to post your progress, comments, discussions, compare notes, announce victories, or ask for help on this map, but ONLY POST FOR THIS MAP, please. And please DO NOT START ANY NEW THREADS for these challenges. Any new threads started for Sparrow's Extreme Challenges will be locked or deleted.

To post for other maps or for general challenge comments go to the main thread where you'll find links to all other challenge map threads.

Visit the main page for Sparrow's Extreme Challenges to see a complete write up with links, information, and solutions for every map.

Complete this challenge map and be included in the Honour Roll of Extreme Challenge Masters. To be listed for this map make a post in this thread to announce your victory. You MUST state what difficulty you played on so we know which honour roll to put you on.

I got a win at this one on Very Hard at the second attempt, it was a long slog but very enjoyable. I eventually won in 41 game years, but without the pressure of a 'Time Until Defeat' I wasn't in any hurry and it was quite a relaxed gameplay experience after the initial chaotic beginning.

The most challenging aspect was clearing enough enemies away from the castle to begin deleting and rebuilding my economy, while fending off the early invasions. Once I'd managed to do this the rest of the game was fairly straightforward.

To begin with I moved all the troops I could find back to the keep and then tried to concentrate on salvaging whatever stone I could from the wrecked sections of the castle to fortify the inner bailey. I relied heavily on hunters to fight with and distract the Pigs troops hiding out in the landscape, if they did come back with some meat then that was a bonus.
I built up my bow and x-bow production as quick as possible to provide a better defence. The small group of archers and knights that I found in the corner of the map were used to clear the abundant iron mines of Pig's troops. This then enabled mass production of the required swords and armour and also allowed me to beign recruiting macemen to further bolster my defence.
Once I hit the point where the invasions were being beaten back comfortably I began amassing a force of archers, xbows and macemen (complimented with many shields), and moved out to confront the Pigs small castle. This fell with relative ease and it was a relief to hear the music turn 'nice'.
The timing wasn't bad as pretty soon after that I achieved the victory, handing out extra rations to off set the negative popularity of the -5 Fear Factor.

I'm really enjoying this feature of your's Sparrow, whats next?

We're not getting as many posters as we were, but actually the last two maps seemed to have done a little better, getting around 100 extra downloads each as best as I can tell. So apparently people are playing these but just not posting.

Any of you out there reading this please let me know how you're doing, whether they're too hard, too easy, or whatever you think. Doesn't have to be long. Quick notes are good, too.

Many things to take care of right from the beginning, I had to delete all of the external walls to keep some stone stock to reinforce the walls after each attack. Of course, I had to eliminate the enemy forces surrounding in order to be able to delete the walls. All invasions coming from a unique pole are not too hard to handle after you have a nice size army. I had to start playing the game at gamespeed 10, not too lose too many military units at the beginning and to handle the many fights when the game starts.

It is difficult to combinate both economic and defense together at the beginning, especially with the fires spreading. Also, you can not access the stone available on the map until you beat the enemy lord, so you must buy most of the stone for a while. I kept tax on almost during the all game and it was not difficult to collect the 10000 gold. I did not put a five here because of the unique pole.

The forces surrounding the castle damaged walls do not help to run the economy, bothering if you want to delete things before it gets destroyed by fire. You need to produce weapons fast in order to survive, facing invasions and eliminating forces near by together so you can start a strong economy. The map is well designed, not too many trees to start with, which adds to the difficuly; and plenty of iron.

Overall, a map to play!

posted 03-27-06 03:47 EST (US)     4 / 5
Well done, Duc de Noisiel, sounds like you had fun. Glad you're working through the various challenges. I've checked your name for this one on the honour roll.
DoY's infamous TREASURE ISLAND - Challenge #13 - Sparrow's Extreme Challenges for SH1 and Crusader

Once you get how the beginning plays out then you should be able to handle it and once you get by it then you can coast to the finish.

I made an initial defensive line in front of my keep along that 2nd wall and then once I got some control I moved everything to the very front wall and continually built up that until the end. I deleted rear stone in the beginning as areas were cleared. Keeping the sq towers for ballista as early support units.

Well to begin with I shut down every building in my economy except the wells. The enemy is everywhere and getting any production going is almost impossible. What I really wanted was the extra peasants so I could throw down my armory and have 10 more archers immediately. I took my initial spread out units and contracted infantry to just outside the keep and to the southern gatehouse. Making sure to protect my archers. I put my archers to the tower and gatehouse to the left of the keep were they initially approach and those few behind my rear infantry on the gatehouse. After the rear was cleared I let those archers move left to start to clear those troops. After they took the archers off the wood towers I moved the knights to take out the other archers before bringing the archers on the left into my front line. Everybody was moved up with the infantry in reserve and a few archers to take out other stationary units. I eventually tore down all stone and put it in one front line and then tearing it down to build on the other front.

So my front was blocked off and only the far right and left were open before that 1st spear attack. This forced the intial attacks to take a long route, coming in towards my gate and then spinning around to that crossing south of the barracks. This gave my initial small group enough time to take them out without too much trouble. The subsequent attacks didn't increase in size as I could see. So as reinforcements are added, battle outcomes are decided beforehand.

I brought my production online soon after getting my defensive line established. Getting food and crossbow production first.

I was pretty sloppy economically on this one, so there is wiggle room. I got food up slow and I didn't deal well with the plagues. Focusing too much on defensive adjustments. I tried to keep pop down to allow food to catch up. I used a few cutters early and bought some wood. Later wood was plentiful allowing me to sell some. I had 2 fletchers very early, peaked at 5, and than down to three.
I got the armor going last allowing my initial buildings to trickle it in before increasing it towards the end.

I used ale and extra or double rations to get the money flowing. Running at -8 and -12 after the wave of plagues.
So the req. money came easy after a slow start. I made sure to fire protect my granary and armory and just deleted and/or spaced outer buildings to deal with intermittent fires.

I used ballista and crossbows along that front line and left a straight path towards the keep just to get the battles over quickly.

I threw down bad things at the end to put me over the top. All the requirements came together almost equally so I held back on those to avoid their negative impacts. Although they probably wouldn't have thrown off overall balance either way.

I took my typical cowards way out to take down the Lord. I put up towers below the ridge line south of his keep. Mangronels were able to eventually take down all of his archers and most other troops. In between major battles I ran some archers over and took out stragglers before picking away at him.

I had fun with it trying to find my ideal starting strategy and it was nice to be able to relax for once to finish off a map.