Castle of the Week 2 – Schloß Glücksburg

Glucksburg is in Schleswig-Holstein, a German state, just below the border with Denmark. The castle was built in a lake by Nikel Karies, a master builder from nearby Flensburg, between 1583 and 1587 for Duke Johann the Younger of Schleswig-Holstein-Sonderburg. It was considered really modern architecture at the time with its French style and luxurious living quarters and is still thought of as one of the finest Renaissance castles in Germany.

The castle was the home of the Dukes of Schleswig-Holstein-Sonderburg until 1848 when it was devastated by the Danes during the Schleswig-Holstein uprising against Danish rule. It was refitted by King Friedrich VII of Denmark who chose it as his summer residence. Between 1853 and 1863 the Prussian army used it and in 1864 it was used as a head-quarters during the German/Danish war. King Christian IX of Denmark was the first King to live there full-time. He has been called the father-in-law of Europe, as four of his children married into the Royal houses of Sweden, England and Russia. A son and grandson became kings of Greece and Norway respectively. In more recent times Albert Speer was interrogated at the castle after the 2nd World War.

The lake was man-made some time prior to the 16th century for fishing and the castle is built on a 2.5 metre granite base sunk into the lake. It is almost symmetrical, with four corner towers and sides made up of 3 tall house-like buildings. Until the 19th century, the towers were open with crenellated tops; the slate roofs were added during the rebuilding. It is surrounded on three sides by water, with a causeway connecting it to the shore. The chapel is one of the earliest Protestant churches in Schleswig-Holstein and, unusually, has the pulpit over the altar. Above the entrance gate is a tablet with the Duke’s motto inscribed on it – Gott gebe Glück mit Frieden (God grant happiness with peace).

Nowadays it is open to the public, housing a museum and hosting cultural events and exhibitions. There is a restaurant in the cellar.

Written by GillB. Photo courtesy of Castles of the World 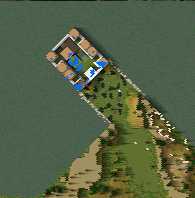