Castle of the Week 4 – Haut-Königsburg

Haut-Königsburg is in Alsace which is part of eastern France close to the border with Germany. It is situated on a forested hill overlooking the village of St Hippolyte, about halfway between Strasbourg and Colmar. From the top of the castle, there are wonderful views towards the Rhine and the Black Forest and, on a really clear day, Switzerland, from the castle which towers over the wine-growing Alsace plains.

In 1114, Friedrich of Hohenstaufen recognised the strategic importance of Staufenberg, the hill on which the castle is built. He had become Duke of Swabia in 1105 and, to make himself secure, he built a whole series of castles. The site contained a Roman ruin originally built to protect a high pass. He named it Chateau Staufen and by 1147 there were already towers on the two extremeties of the hilltop. In 1192 it took the name of Königsburg. In the first half of the 13th century, the Dukes of Lorraine took over the castle, profiting from the weakened state of the Hohenstaufens, and bestowed it to the Lord of Ratsamhausen and later to the Lord of Hohenstein who stayed there until the 15th century although the ownership passed to the bishopric of Strasbourg. In 1453 its name became Haut-Königsburg to distinguish it from a castle at the bottom of the hill and it was lost in 1454 after a short battle with Frederick the Victorious.

In 1633 the Swedes, who were fighting the Thirty Years War against Austria, besieged the castle which, by this time, had become fairly dilapidated. Despite this, its stubborn garrison withstood the bombardment for 52 days, refusing dire surrender ultimatums. Finally, out of food and ammunition, the Swedes took the castle although the garrison disappeared and, shortly afterwards, the castle was destroyed by fire. In 1865, the ruin and surrounding forests were acquired by the nearby town of Selestat. 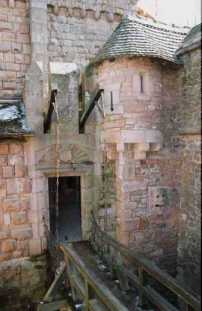 In 1871, Alsace became German and, in 1899, Selestat gave the ruins and surrounding land to Kaiser Wilhelm II of Germany. He wanted it to be a symbol of the western frontier of his empire and decided to restore it to its 12th century glory but as a medieval museum rather than a royal residence. The architect was Bodo Ebhards and the work took 8 years starting in 1900. Although the architect consulted historical documents, his restoration is often criticised. Many people had found the ruins romantic, but the restoration was considered pretentious by many.

In November 1918, the castle was occupied by French soldiers and in 1919 Alsace became part of France again under the Treaty of Versailles and the castle became known as Haut-Koenigsbourg.

During the occupation of France by the Germans in the 2nd World War, the castle housed collections from Colmar Museum and also tapestries from the Cathedral, Town Hall and museums of Strasbourg. In November 1944, a corps of American troops arrived and relieved the castle, using it as an observation post.

The walls are 4 metres thick on average, 8 metres in places, and were the principal defense as they could withstand artillery attack. The steep sides of the hill, 757m (2498 feet) high, made it very difficult for heavily armed attacking soldiers and, particularly, artillery. Additionally the top of the hill was rocky which gave the castle very solid foundations and made it impossible for any tunnelling to take place. From the top of the keep, it’s possible to see any movement on the plains below. If besieging armies managed to get inside, they still had problems. All the internal buildings and towers were built strongly; the slope up to the main keep was protected by murder holes and the stairways were narrow spiral staircases with irregular treads. The closer the invaders got to the centre of the castle, the more difficult the advance became.

Nowadays it is open to the public, fully restored and furnished, as an example of everyday castle life in centuries ago France. There are also many weapons on display from huge swords to cannons.

Written by GillB.
The large present day picture is courtesy of Castles of the World
The other 3 are courtesy of Le Château du Haut Koenigsbourg: Notre démarche. This is a fascinating French site as there is an immense amount of detail about the castle all based on a visit by some schoolchildren. It’s even more remarkable when you realise that the children who wrote it were only aged between 7 and 9 at the time. 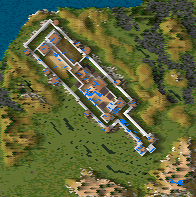