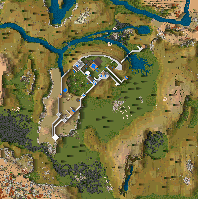 This is a short--about 5 years--and furious map with an odd and difficult to defend castle. It has openings in the front, a hole in the rear wall and a main gatehouse far off on the southwest side. There are two signposts, one to the southeast, and another in the northwest. You only have two invasions to endure, but they are large and the first one is only a little over a year away.

You can build walls, stairs and towers, but not gatehouses. You start with 25 archers, 20 spearmen, and 10 pikemen, plus weapons to train another 16 archers and 10 crossbowmen. This is not nearly enough to defend the castle in its present condition, so you need to produce lots more crossbows and upgrade the castles defenses. Spears and bows are the only two weapons you can buy. You have no iron and no iron mines are available so you cannot produce hardier melee troops. You will be up against a variety of troops including crossbows, pikemen and a few knights, so crossbows and strong walls are really your best hope.

The large gatehouse to the west should mostly--but not completely--be ignored by the enemy, but use of it to access needed resources would involve an unacceptably long route. Time is of the essence and you must keep journeys short. Therefore you need to keep outside access at both the front and back. The lack of gatehouses and your need for loads of wood and all the stone you can quarry means you must maintain access to the surrounds at all but the actual time of attack when you will need to wall off the besieged entrance. The long, circuitous route to the opposite side's entrance means that, with luck, you may be able to keep one or both open at all times.

The enemy will sense the open access on the opposite side when their assault on the first side is discovered to be blocked, and many will march for the other entrance. This gains you valuable time and also exposes them to your archer and crossbow fire while in transit. While this is much to your advantage, the enemy is quite numerous and may still have more than enough strength to breach your walls and defeat you.

Many parts of the wall are invulnerable because of the topography, but there are still numerous places that can be breached. These are the main gatehouse, an area of the front wall to the west of the open entrance, the open entrance, and the area around the hole in the wall on the back side.

The modifications I made to the castle were mainly larger, taller towers, thicker walls in the vulnerable areas, added and improved stairway access to the towers and walls, and what killing pits I could afford at the main entrance. Square towers were what I always added so that a ballista could be in each one.

To get the needed stone I set up four quarries and scavenged stone from the walls and towers on the plateau area of the castle and the outlying ones in the southeast corner, which aren't really needed. I put a square tower in place of the one made of wall tiles in the rear to the right of the hole. Another went to replace the flat wall area just to the left of the main open entrance. The small perimeter turret behind it was removed. The third was put into the very low, partially hexagonal wall emplacement behind the defense turret that extends way out, flanking the right side of the open entrance.

Anything I put in that defense turret usually could not survive so I just deleted it and all of the wall extending out from the main battlements. I then ran a wall across the entrance from about half way back on the side of the new tower. Likewise the defense turret extending northeast across the river was of no use to me so I razed it and the wall back to the river. It's a good idea to fill in the opening in that wall next to where it would join the main castle wall. I reinforced the outside of the towers with double layers of wall.

Many of the walls, and towers made of wall tiles in the original castle do not have access. You may want to fix this. I also built industries on every tile of space I could use in the lower part of the castle, so removed many superfluous walls and stairs. I then put in more efficient and complete stair access where appropriate. Don't forget it may be necessary to move troops from one side of the castle to the other, so stairways should have a fair amount of efficiency.

I started by setting up about 20 woodcutters. You really need all the wood you can get in this scenario. I gradually moved all the hovels far out to the other end of the plateau and relocated the market, barracks, plus new inns there, too. I added one more stockpile tile and began the slow process of building up wheat farms, bakeries, mills, hops farms, breweries, fletchers, tanners and quarries. You have to balance them out and build them all up together. I also placed one dairy farm down on the lower level to supply the tanners. The original apple orchards were replaced with wheat and hops farms. I razed the central gatehouse and wall to make more room. Late in the scenario, when all the lower space was used I placed extra bakeries just up the hill on the plateau.

Eventually I got to a +4 with ale and extra rations at the granary, although I had to run at normal rations much of the time. I ended with a population of 118 and taxes at -8, but they were much lower than that most of the time, sometimes on zero.

When the attacks come, hopefully you'll have enough crossbowmen. I left four archers on the western gatehouse and brought all the others down to the main area to reinforce the crossbowmen in the main towers. I did also leave a few in each of the two tall wall towers in the front of the lower part of the castle. I blocked off the large western gatehouse and reinforced it several tiles thick. The walls usually take a battering in the first attack, but you will be in better shape for the second one.

The first attack includes catapults and laddermen, and the second one trebuchets. Take out the engineers before they reach their tents if you can or try to destroy the siege engines if they are in range once built. If neither of these options will work, hopefully your walls are reinforced enough to withstand the beating. Stationing your spearmen around the walls can help counter the laddermen, or double crenellated walls. I found that many time the engineers and laddermen don't even deploy.

Sometimes things go quite well, but on replaying things may be markedly different, especially it the enemy uses the back signpost. If the enemy archers and crossbowmen mass together they can be quite deadly. I have even seen enemy pikemen damage the low part of the back wall, creating damaged wall segments that act as stairs, then swarm over the back wall. This is rare, but you can never quite be sure how things will play out on this map.

You may not find you need as much as I built but here's what I ended up with:

You can also check out Brave Sir Robyn's write up in the map's forum thread. It looks like he took a slightly different approach, using archers and a much smaller economy, and still came out victorious.